“The Family Just Got Bigger” reads the subtitle under Disney’s new Beverly Hills Chihuahua 2, a sequel to their first big Chihuahua hit. Bigger is an understatement.

In Beverly Hills Chihuahua 2 our familiar friends, Papi and Chloe become new parents of a 5 mischievous puppies that prove to be the story’s heroes after their human owners get in some trouble, the puppies will stop at nothing to reunite their family, both Chihuahuas and humans alike by entering the Beverly Hills dog show.

Without the star voices of Drew Barrymore and others, Beverly Hills Chihuahua 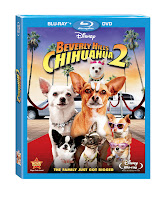 still has a great “bite” of character voices with George Lopez voicing the feisty Papi and Odette Yustman voicing Chloe, along with some other refreshing new character voices.

Don't forget to enter the Posh Puppy Boutique and Disney's Getaway Sweepstakes. You can enter and win lot's of exciting new items for the "love" in your life.

Posh Puppy Boutique has partnered with Disney to give away some great items in the Posh Puppy Pack from sponsor's such as:

If you have not entered the Posh Puppy Boutique Family Weekend Getaway Sweepstakes - you can't win all these great items or a chance to go to LA. Do it today! If you are interested in Pre-Ordering the movie and beat the rush - you can visit the Pre-Order Page.